We'd ridden together before. In fact, several times, putting around Portland, just touring the city and the surrounding countryside. I'd put about half an hour at a time on her, maybe an hour once or twice. But this trip was going to be longer. I was heading to The Dalles the long way around, riding with the Suffragettes Centennial Ride, up and over the roads that put you on the slopes of scenic Mount Hood. It's a great motorcycle ride. Usually. 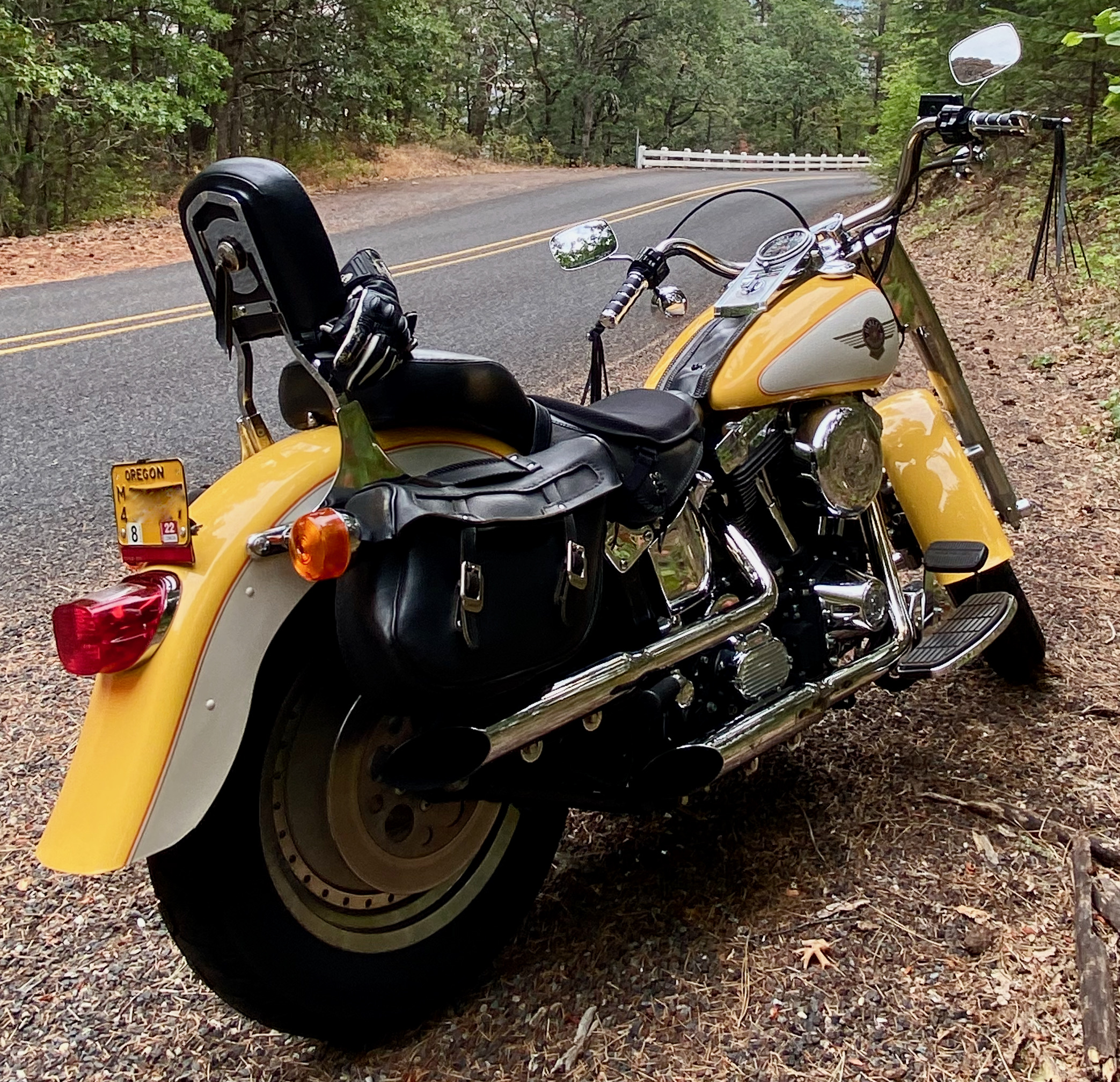 The bike belongs to my brother-in-law Richard who is 6'2" to my 5'8". So the reach to the handlebars is a bit of a stretch, and so are the foot rests. The seat is sloped a bit backwards so I kind of cuddle into it, tail tucked under.

I don't know, maybe I'm just older now, but the seat felt somehow harder this time. So a couple of days before the trip I cruised over a motorcycle shop and bought a gel pad for it.

Aaaaah.  So much more comfy! 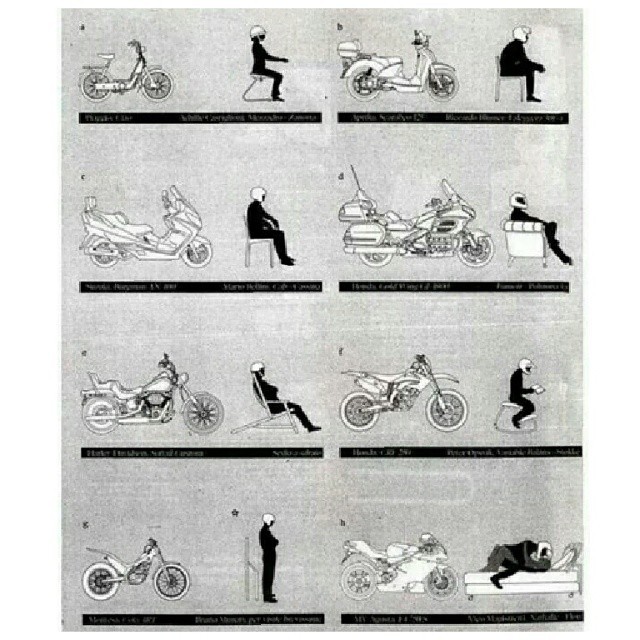 An amusing illustration of the various motorcycles and riding positions.

The trip started well enough. The group super-slabbed it for a short while to get to the back roads to Mt. Hood where we gained altitude and experienced gratifying sweeps around the curves. We stopped for photos about 45 minutes in. Good thing, because in the last 15 minutes of that segment I was shifting around in my seat trying to get more comfortable.

That five minute pause gave me another 30 or 40 minutes of riding comfort and just when I was getting desperate, we stopped for gas.

The next 20 minutes we rode uphill at speed where, lacking a windscreen, I was fighting the wind and gripping the handlebars with all my might. 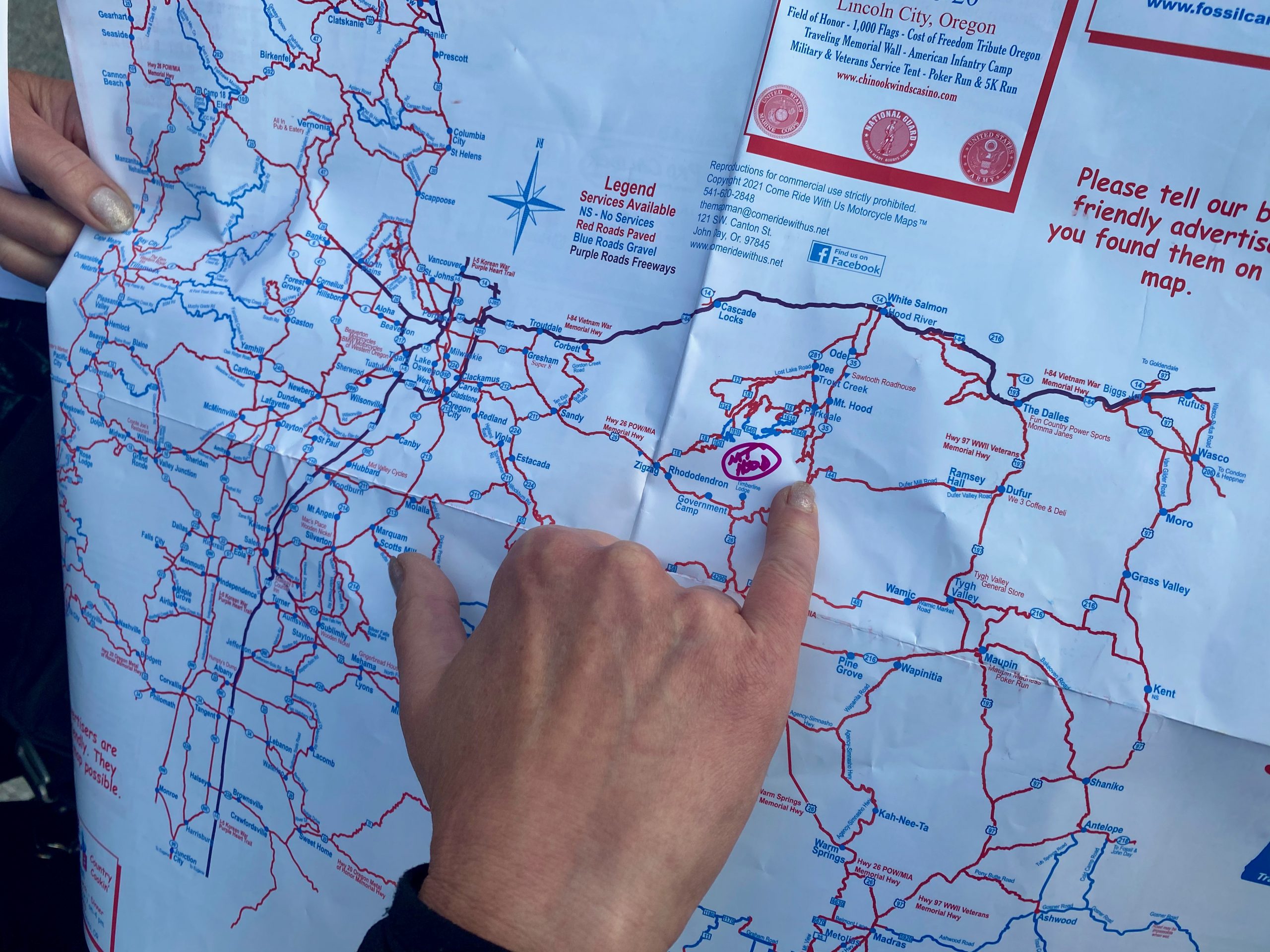 Our route around Mt. Hood.

No way to lean

I desperately wanted to lean forward and get my feet underneath me but my boots had only one place to rest—forward on the pads. At the next stop, I folded the passenger pegs down to see if I could reach them a la race position, but no luck. 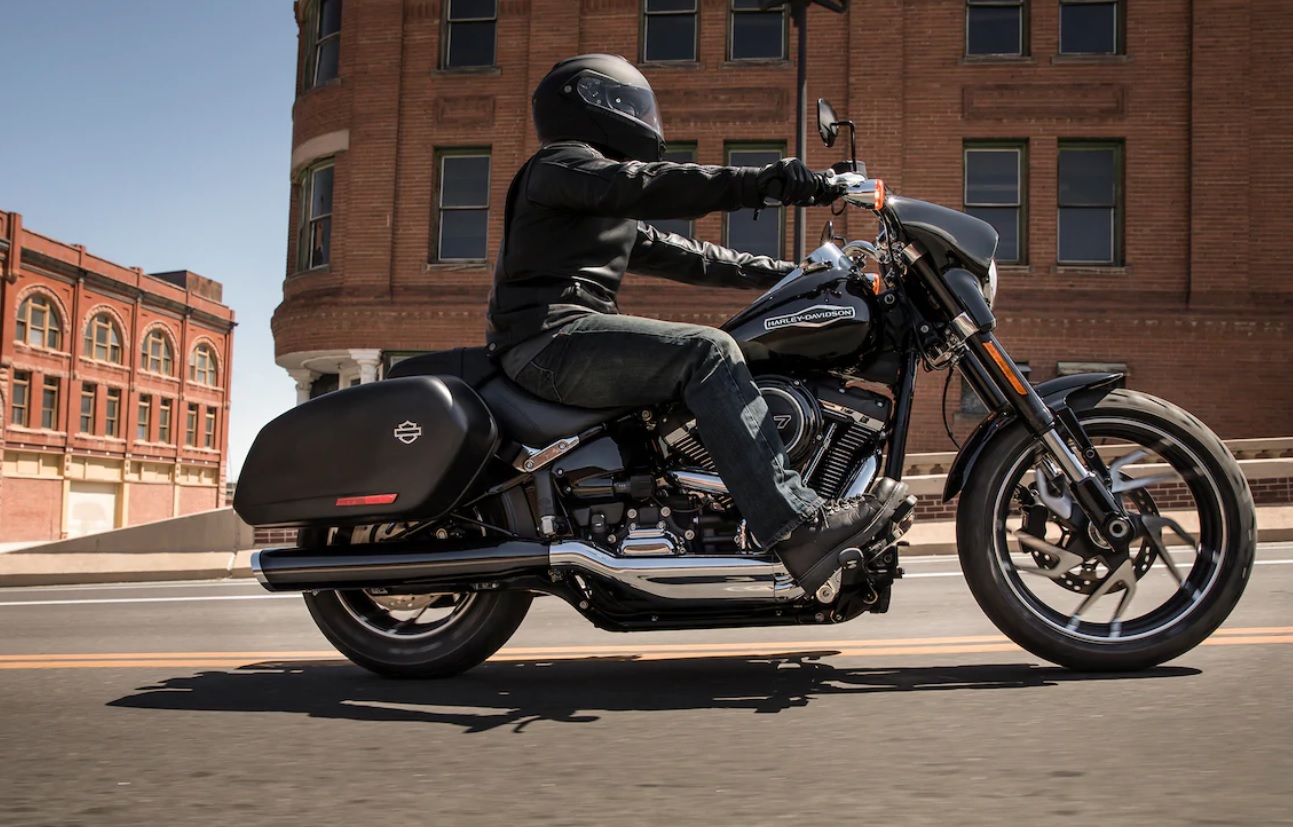 In this photo note that the cruiser has your feet and hands in front of you. Great for cruising around town but arguably not so much for long distance.

Stopping helped a lot. We paused for a good long time at Rowena Crest to take photos. By now, I accepted that I could only make the trip in 30 minute segments pain-free and, beyond that, would just have to suffer to stay with the group. 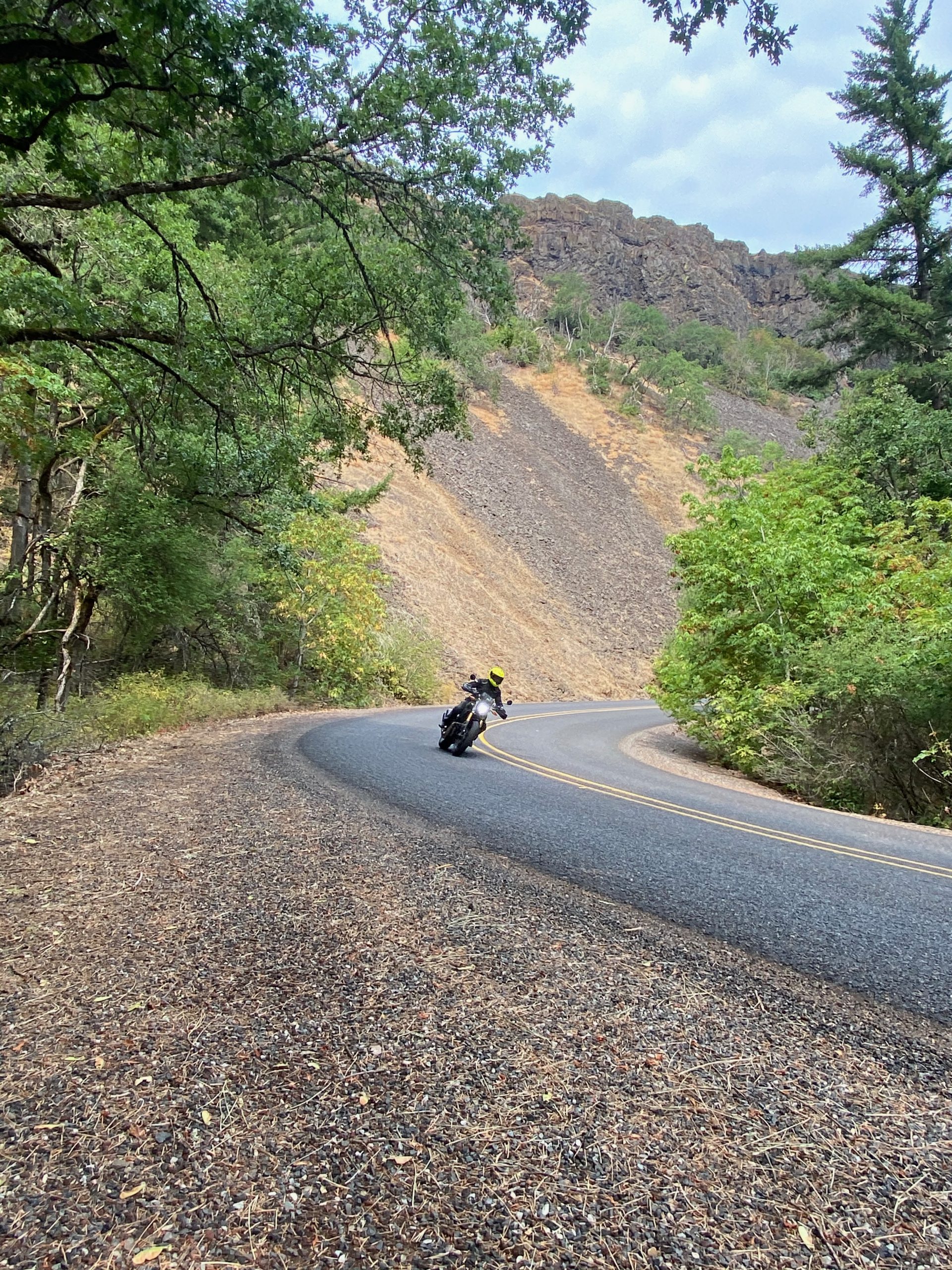 We stopped at Rowena Crest to get photos of everyone rounding the curves. This was a great route!

We hit The Dalles right as I was feeling desperate again. The hour mingling with friends who'd taken the other way around the mountain provided a much needed rest.

The road back to Portland

Our route back to Portland followed the Hood River and the picturesque towns on its banks. It was a lovely day with sunshine and a cool breeze and so I focused on the surrounding beauty instead the of the mounting pressure on my tailbone. 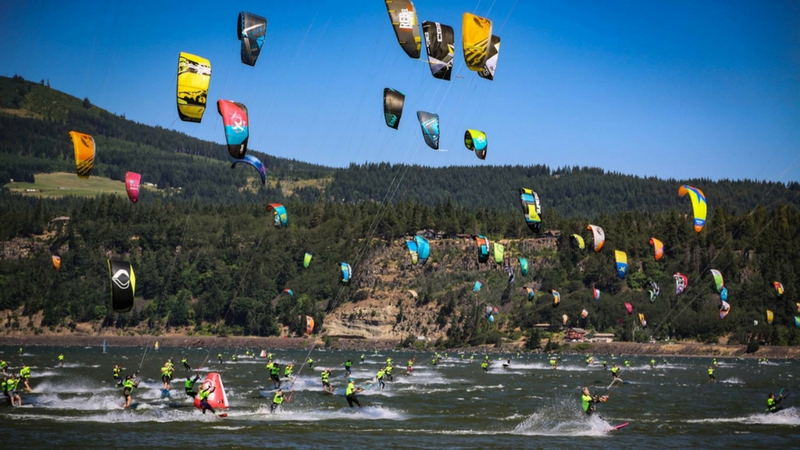 One rider dropped off to take the route home to Vancouver, Washington and then it was just two of us through Portland, highway all the way. We stayed in close staggered formation to present two headlights to impatient drivers in the frequent periods of congested traffic. It was especially stressful for me as a Californian who is accustomed to lane-sharing.

Unfortunately, Oregon's lane-sharing bill had just failed to pass, so we were stuck in Portland's record-breaking heat in stop-and-go traffic. There were a few times I thought about risking it anyway, not only because my butt was killing me, but the heat thrown off the pipes, combined with the heat of all the engines of the cars reflecting off the asphalt, along with the hot sun beating down, was making me feel a bit woozy. 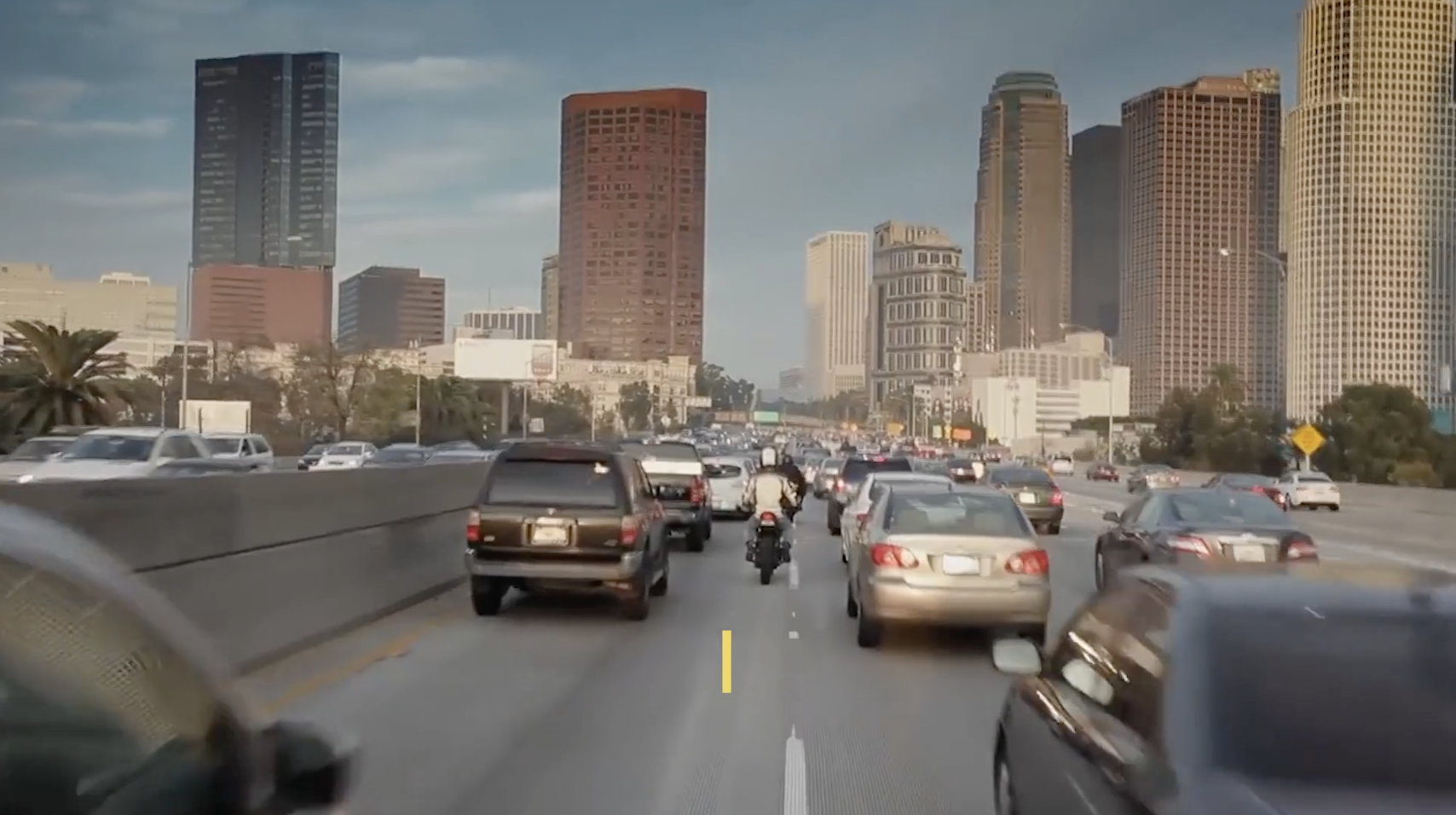 Next vote, please let us through! (Thank you 🙂

By the time my exit came up I was so very ready for a rest. Arriving, I hopped off and shed my gear, pushed the bike back into the corner of the garage, said thank you and goodbye. I grabbed a cold one from the garage fridge, said hi to my sister Celia, showered, and enjoyed the rest of the afternoon in the air-conditioned house.

The next day was busy with family tasks. Celia and I went over to my nephew and his wife's house to help re-plumb the kitchen disposal (Celia) and do some gardening (me). They were expecting a baby any day now, which was exciting, and needed all the help they can get.

We made a run to Home Depot to get plumbing parts, which is where I started to feel some pressure in my chest and tingling in my arms. I also felt a suddenly light-headed and inexplicably tired.

I tried to shake it off, reasoning that it was just the gardening. Some of it was pretty strenuous, pulling roots and trimming trees. But I know what muscle soreness feels like and it didn't feel like that. When we got back to the house I looked up "heart attack in women" and the symptoms matched completely. 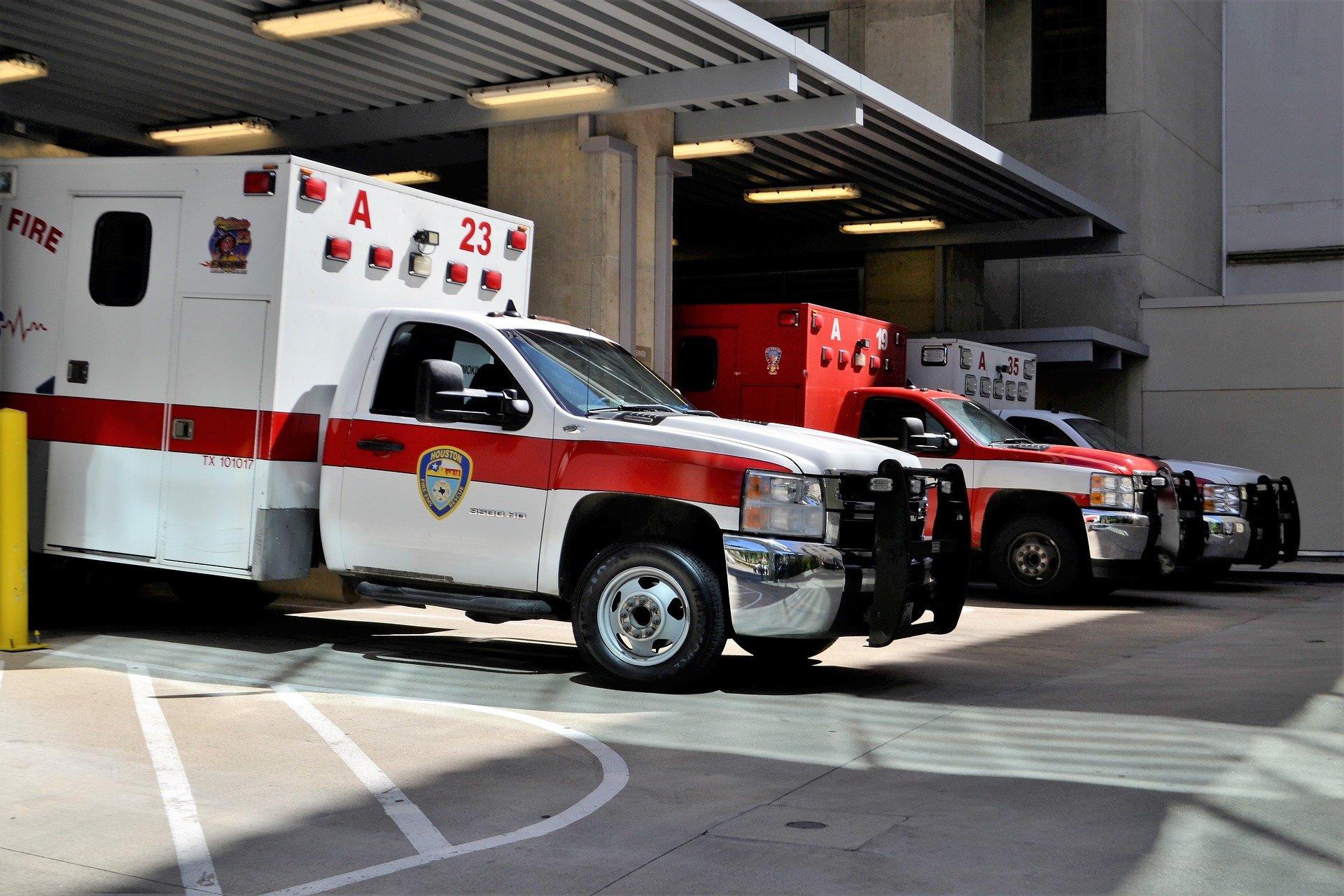 A trip to the emergency room

I couldn't ignore it. My dad started having heart attacks before he was even 50 years old, and has survived several more (yay for the quadruple bypass!) and a serious stroke from which he doggedly recovered.

I felt more than a little silly, like I was overreacting, but there was no denying the increasing pressure in my chest. Celia insisted on driving me to the hospital where I was immediately admitted, given a couple of baby aspirin, an EKG, a blood test, and an X-Ray. The doctors agreed, every symptom was there. There were worried faces and a second EKG and blood test ordered.

The doctor asked, "Are you experiencing any stress in your life right now?"

We waited for the results, discussing plans A and B and scenarios C, D, and E. We were both scared, but at least I was in the right place.

We waited and waited, convinced that I would be admitted so they could find and repair the blockage.

Blockage! It was frustrating as someone who eats well, exercises, does yoga and meditation, bicycles, motorcycles, and hikes. My blood pressure is low and so is my cholesterol.

I was discharged a couple of hours later. Diagnosis? Muscle strain and fatigue, and probably a little dehydration. The riding position had exercised muscles I didn't know I had across my chest, straining my back, shoulders, neck, and jaw, and also probably caused tingling in my arms and hands. Nervousness about my symptoms probably caused the shortness of breath and lightheadedness, and nausea, too, though there may have been residual dehydration from the previous day sitting in traffic and from eating power bars instead of lunch.

"You did the right thing by coming in," said the doctor.

"Really, don't feel silly," said the nurse. "You only have one heart."

But really, I don't think I'll ever ride a bike that doesn't fit me well... for long, at least.

How to make your bike fit you

You can do all kinds of things to make your bike fit your body for a more comfortable and safer ride.

You can find the information you need on motorcycling and brand-specific forums, and magazines as well. Women Riders Now has a really good article that includes resources for aftermarket levers for Harleys and Indians, here.

Symptoms of a heart attack in women vs men

Noticing my embarrassment, the nurse was very kind to remind me, "You only have one heart." So now I'd like to encourage you, if you think you're having a heart attack, get on down to the emergency room.

Remember, symptoms for women can be much different than for men. Here's the info. 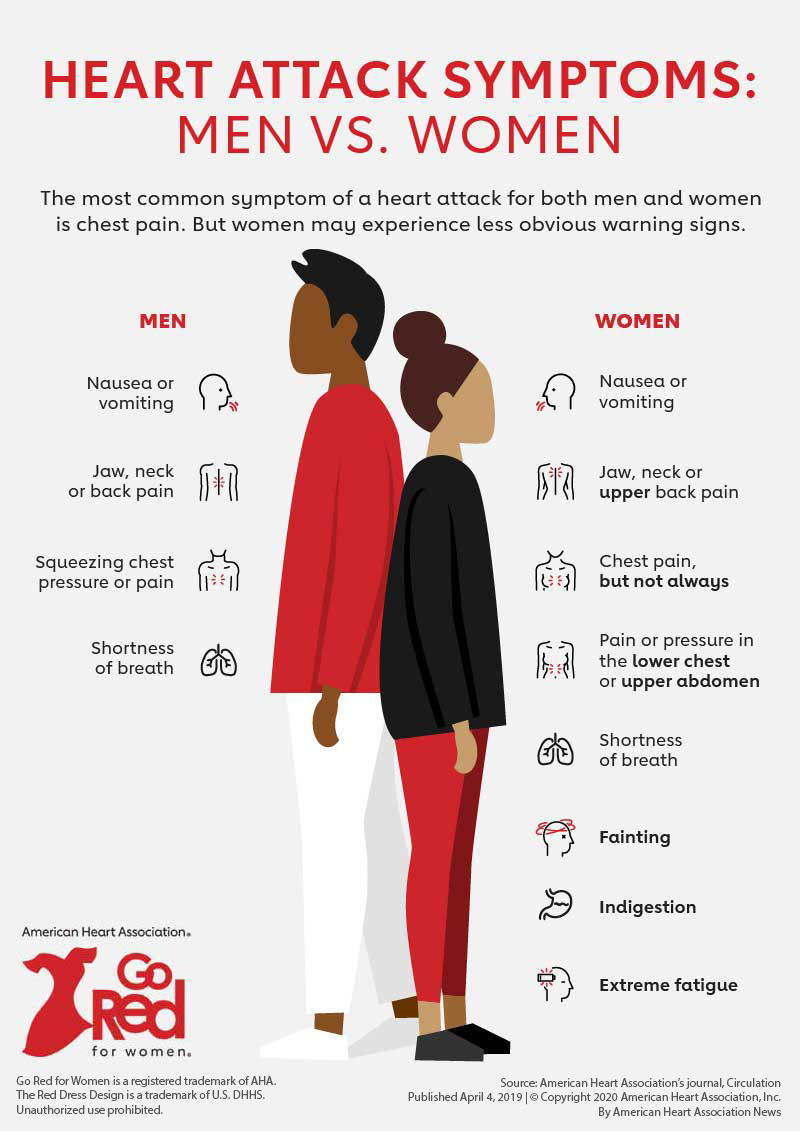 I'm sharing this, even though I'm pretty embarrassed about it, in the hope that someone will benefit. So don't talk yourself out of going to the emergency room if you have any of the symptoms above. And if you're uncomfortable on a bike you own or borrow, try to customize it to fit you. My three bikes are completely customized to fit me, and my brother-in-law's bike fits him.

Have you experienced any of these things? I'd love to know in the comments below. Also please share this post with a friend or on social media. Awareness helps a lot! Thanks!