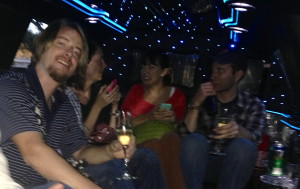 Is it acceptable to begin a tour of San Diego’s microbreweries with a glass of champagne? Well of course… as long as you’re riding in the back of a black stretch limo. After all, the lights are low, we are elegantly sprawled on the leather couches in the dim light of twinkling LEDs that line the velvety black roof of the car, and the music thumps in time to the streetlights racing by. Clink clink. To new friends and a Tuesday night out on the town. 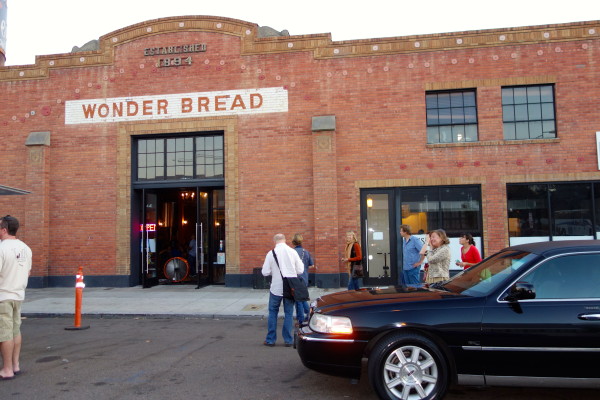 I’m almost sorry when we stop and have to scramble out. Our driver, James, helps us exit the car gracefully at the… Wonder Bread warehouse? We walk past a food truck and inside, and voila, it’s the Mission Brewery in disguise. The rustic warehouse brick, concrete floor, and high ceilings is the perfect housing for the super hi-res metal containers and pipes that line two walls. 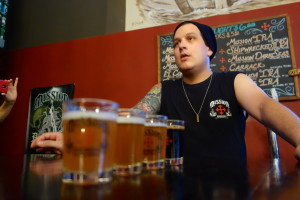 Almost all the bar stools are occupied so we gather around one of the picnic tables, but as soon as a group leaves we take their place and order from the heavily tattooed bartenders serve tasting glasses four-up. I like the Zythos IPA rye brew. It’s bitter. I like bitter. Jonathan likes the Raspberry Wheat. Fruit in beer? I’ll take a lemon in my Hefeweizen or a lime in my Corona, but leave the berries out, please.

There are more bitter beer, hoppy beers, and beers with coffee and chocolate undertones. Anything with chocolate and coffee is okay by me. I keep sipping, but come back to the Zythos IPA. Because you’re a bitter person, says Jonathan, sipping his berry beer, a mischievous twinkle in his eye. This gets a laugh and fuels an already spirited argument among everyone about the merits of bitter vs sweet, IPAs vs stouts, hops vs barley, fruit vs effervescence. Nobody doesn’t have an opinion and soon we are swapping tasting glasses until we don’t know which is what any more. 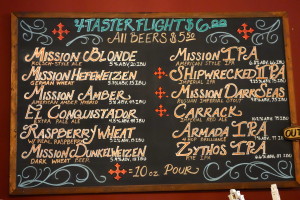 Clearly it is time to leave. Plus, I am starting to get hungry enough to wonder about that food truck in the parking lot. Luckily James lets us know that it’s time to move on to the next brewery. “Is there food there?” I ask. “Yes. It’s a proper restaurant,” he assures me as we file into the car.

It’s a ride from Downtown to The Island. The Coronado Bridge goes by and then we’re on it with a view out onto the harbor with boat lights twinkling on black water. Somebody rolls down a window and a cool, salty breeze ruffles our hair. I want James to keep driving. To turn around and cross the bridge again, and then again, relaxing back into the couch-like seat and let the view go by.

Elaine tells me that the Coronado Brewing Company is a local favorite. That’s saying something because the brewery scene in San Diego is big and getting bigger. Later I discover, in an NBC San Diego report, that San Diego has over sixty breweries, more than twice the number than any other California county. And a report on The Economic Impact of Craft Breweries in San Diego from the National University System Institute for Policy Research found this interesting tidbit:

One of the fastest growing business sectors this decade has been craft brewing. Since 2011, the total number of craft breweries in the region has more than doubled. In addition, San Diego’s craft brewers contribute to the region’s tourism industry dollars by hosting year-round events, festivals and facility tours… In 2011, brewers and brew pubs generated a $299.5 million direct economic impact in San Diego County. 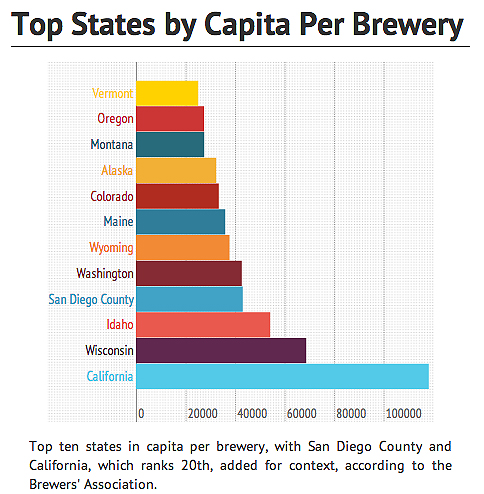 Craft breweries even bring more money into San Diego than Comic-Con. Though craft breweries are booming all over the country, San Diego ranks right up there – ninth, in fact – with the biggest brewery states according to this Voice of San Diego report San Diego’s Craft Beer Economy, in Three Charts.

Of course I didn’t know this as we floated along in the limo, frivolously sipping Champagne. I ought to have been saving my palette for the famed brews of the city. Next time. 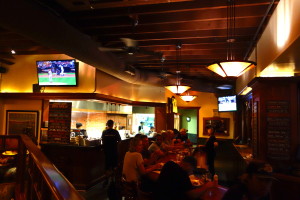 The Coronado Brewing Company is indeed a proper place with a hostess and a bar and a dining room where we are led to a long varnished wood table in the middle of the floor between leather-clad booths. 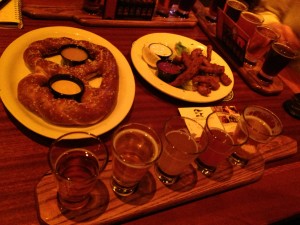 The ten of us settle in to order another flight of beers and a few appetizers including the largest pretzel I have ever seen, warm and sprinkled with large chunks of sea salt. Two of us grab it at once and it tears open, steaming. Perfect. I go for bitter again and Jonathan for the Hibiscus, and though I’m attracted to the idea of stout I can’t quite stomach it, its bready texture fights with the pretzel in my stomach. Or maybe it’s the champagne.

Important note: Coronado’s famous stout is 10% alcohol, earning it the title of “Stupid Stout.” The the Blue Bridge Coffee Stout tastes stronger but has half the alcohol, and though I find it likable it’s too heavy to have more than a couple of sips. 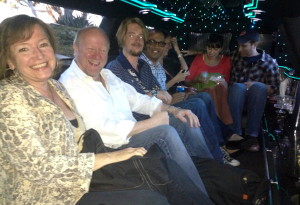 We nosh on some popcorn squid or maybe shrimp, by this time I can’t tell or don’t care, and so I guess it’s a good thing they cut you off at two beers. We look around and note that indeed, most of the diners are already sipping from water glasses. Have I drunk enough to be stupid? I figure the whole night I probably had two whole beers, maybe a little more, and that glass of champagne we shared in the limo. Still, I’m certainly not up for driving, so I’m glad we’re back in the limo, enjoying the floaty transport back home. What a great idea.

San Diego Brewers Guild has information on the Nov 1-2 San Diego Brewer’s Guild Festival. Their mission is to promote awareness and increase the visibility of fresh, locally brewed beer through education and participation in community event and they are info-central about San Diego’s fresh local beers and the breweries that make them.

The Complete Guide to San Diego Breweries is coming soon from the San Diego Beer News.