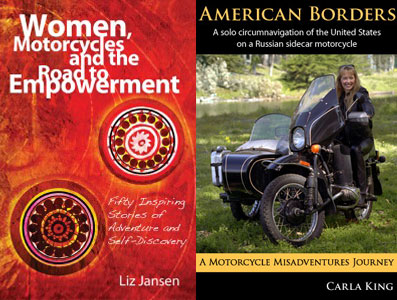 Last time I saw Liz Jansen I picked up a few of her books to sell as a pair with my American Borders motorcycle misadventures for holiday giving. So readers in the USA can get American Borders plus Women, Motorcycles and the Road to Empowerment for $30 plus priority mail shipping ($5.15) in one nice little package. Liz’s book collects 50 stories of women who chose motorcycling as their power vehicle, some of them against all odds, with physical so-called limitations – ha! – and other barriers. These stories will have you laughing, crying, and cheering.

My dear friend and writing partner Lisa Alpine’s story collection is titled EXOTIC LIFE: Laughing Rivers, Dancing Drums, and Tangled Hearts. It’s won awards and flies off the shelves at a local bookstore in Marin. What I love about this book is that Lisa doesn’t hold back the truth about adventuring, thrills, chills, love, and heartbreak. Lisa’s traveled, and solo, since her teen years, and then with her son, Galen, now in his twenties, who has followed in her footsteps to work and vagabond around the world. A great role model for anyone thinking of traveling, and a great read for those who want vicarious thrills.

The latest edition of Chris Scott’s Adventure Motorcycling Handbook, published October 2012, is already topping sales charts in the UK. Adventure motorcycling has grown massively since the last edition. Now in its third decade, the much revised and expanded AMH6 catches up with all of it, and guess what? I’ve got a story in there about motorcycling Morocco. It doesn’t matter where you’re going, what your riding, you’re going to want this book!

I am honored that my story Alone, Illegal, and Broken Down in China is included in Travelers’ Tales Best Travel Writing 2011 edited by James O’Reilly, Larry Habegger, and Sean O’Reilly, with an introduction by Pico Iyer who writes that “…many, many of [these stories] did what only the most memorable trips–and the most deeply felt essays–do, which is to deposit me back in my life someone different from the person who set out.”

How about you? Got some adventure books you are enjoying this winter? Let me know in the comments below.