July 16, 2021
At sunrise I take my coffee to the cliffs and scan the sea through the fog. There are fishermen in pangas or skiffs—whatever the name is for those small, simple boats—in Baja they were everywhere and here, too, but here they bristle with fishing rod racks and holders, and have proper lighting and the fishermen of course wear proper gear and have the required number of life-jackets on board. 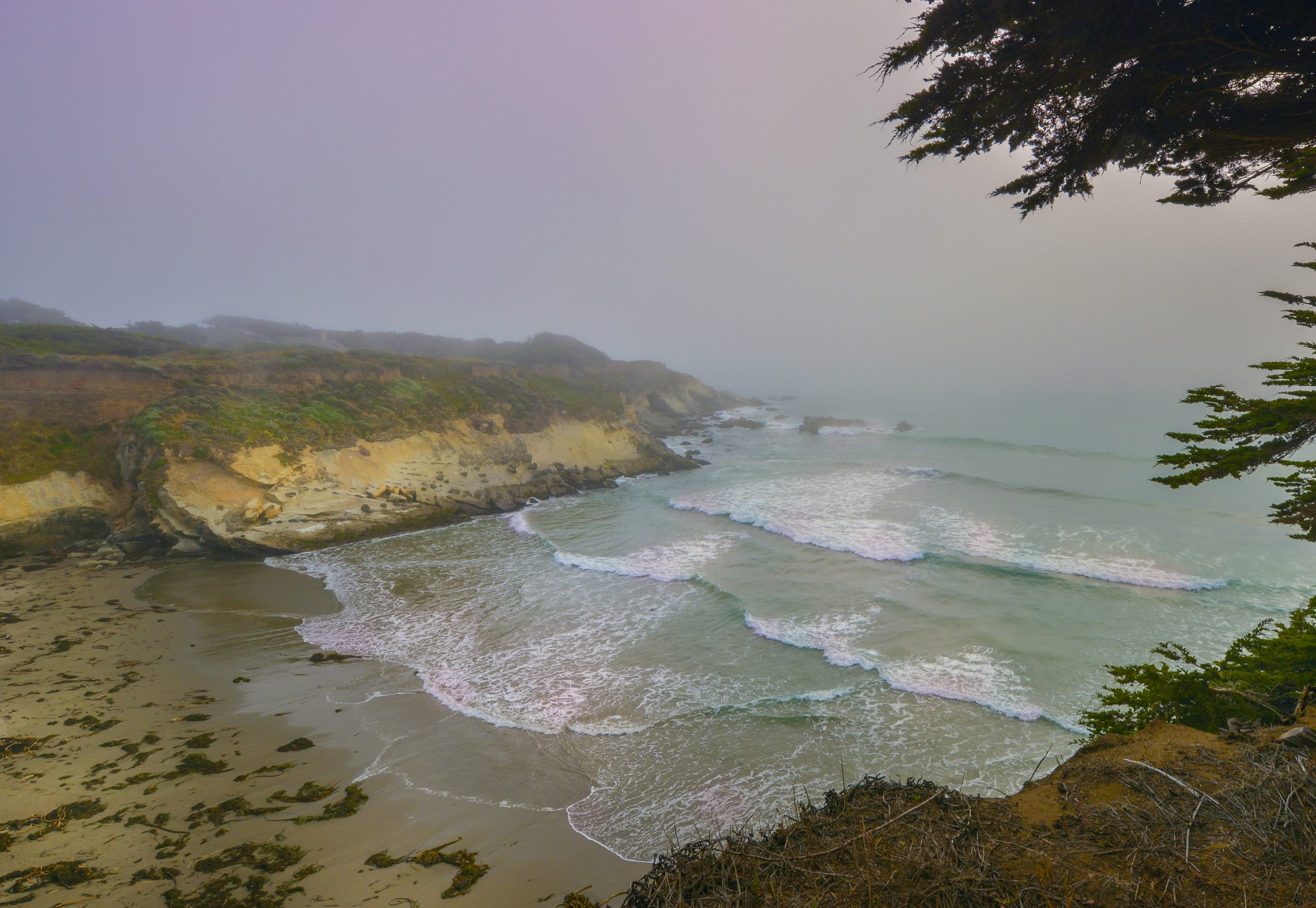 The trail to the cliffs is just a small hop over the rickety wooden fence between the sidewalk and the cliffs. It's beaten through the ice plant, their fluorescent pink buds closed tight waiting for the sun, and then a short jump down to the flat rocks where I fold my jacket and sit, sipping coffee as the fog wets my hair because I forgot my hat.

My binocs are trained on the kelp beds. The big sea lion carcass that was floating for a week finally sunk so there is little to focus on. A snow white egret catches my eye, wings flapping, struggling to keep its balance atop the kelp bed. A sea otter rolls and rolls, grooming itself.

Yesterday morning I took my paddleboard out for the first time. I launched it at Cowell's (12 quarters for an hour and a half in the parking meter, I must find the free local secret launch place), and walked it across the flat beach atop my head.

At the last minute, I texted my niece (who lives around the corner), because my sister hates it when I go off by myself without telling anyone—and set out. It was low tide and the waves were small. A surf class walked out behind me, the instructor bantering with his customers—Norwegians, or Swedes or Finns by their language. At least they won't be shocked by the water temperature, I thought, like the east coast tourists who fly here in shorts and tank tops and immediately purchase sweat pants and jackets emblazoned with SANTA CRUZ in yellow across a red circle.

The sea swells under the board as I paddle out, skirting the kelp beds and then I spot a trail through it, a curving swath of clear water made by a current or a sea lion. The kelp flows like hair just beneath the surface and sometimes catches in the skeg causing a little stutter and a couple of times I almost fall. 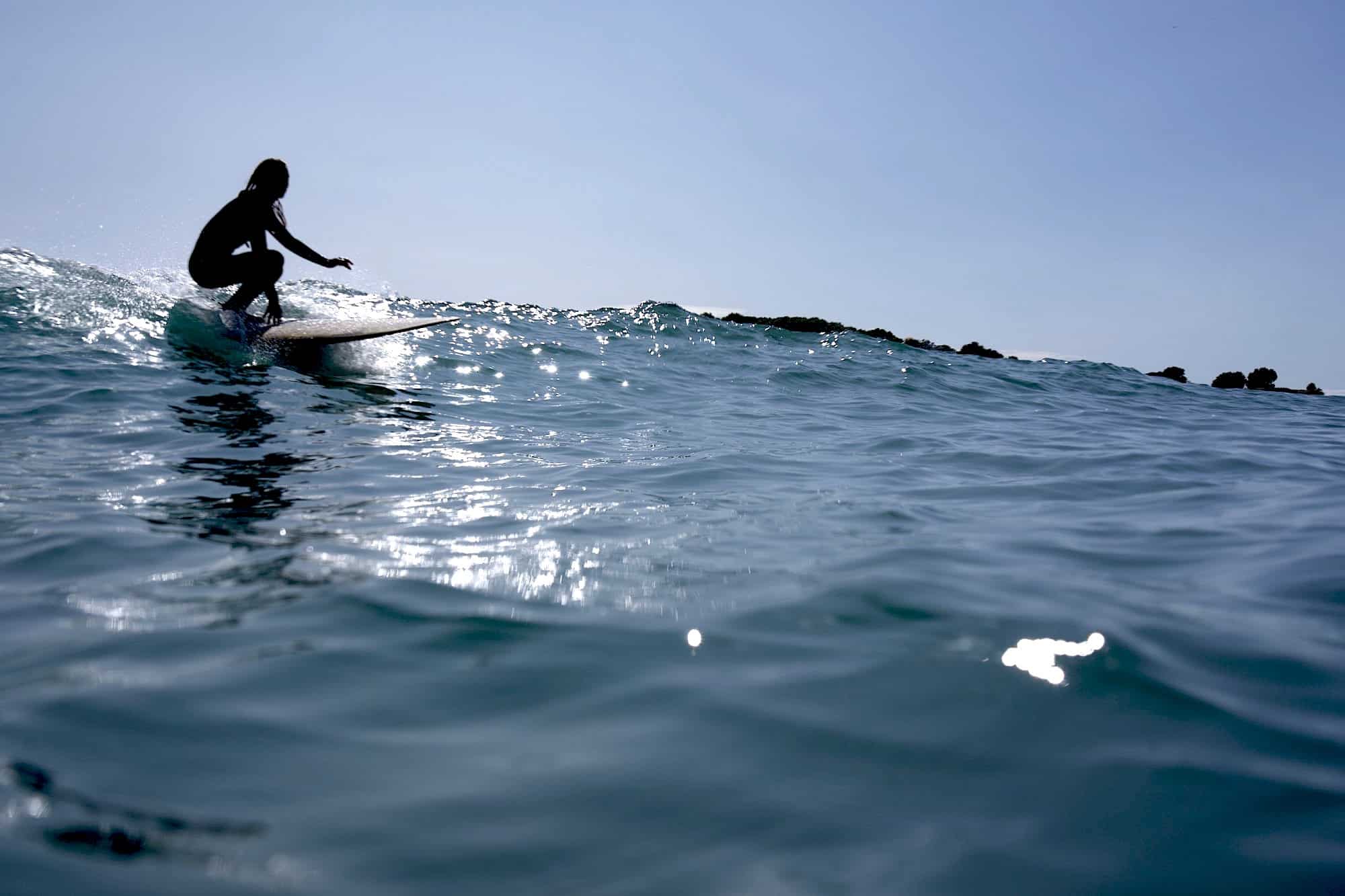 At the other side of the kelp bed I stop to watch one of the surfers at Lighthouse Point as she catches a wave higher than her head. She makes it seem effortless, letting the water push her along and at a certain unknowable cue she stands up and pushes the board down the slope with her front foot to slide along the curve at the base of the wave in ten seconds of grace before it breaks.

The surfers eye me as I skirt the kelp bed to circle back around, but I'm not there to compete for waves. I'm looking for seals or sea lions or dolphins or otters. A snow white egret startles and spreads its wings but, deciding I'm not a threat, settles. And there they are. Dozens and dozens of sea otters nestled in the kelp beds, their gray faces like little old dogs watching me glide by. The males and females hang out in different social groups, so the cuddly spooning couples are not mates but friends or pups. 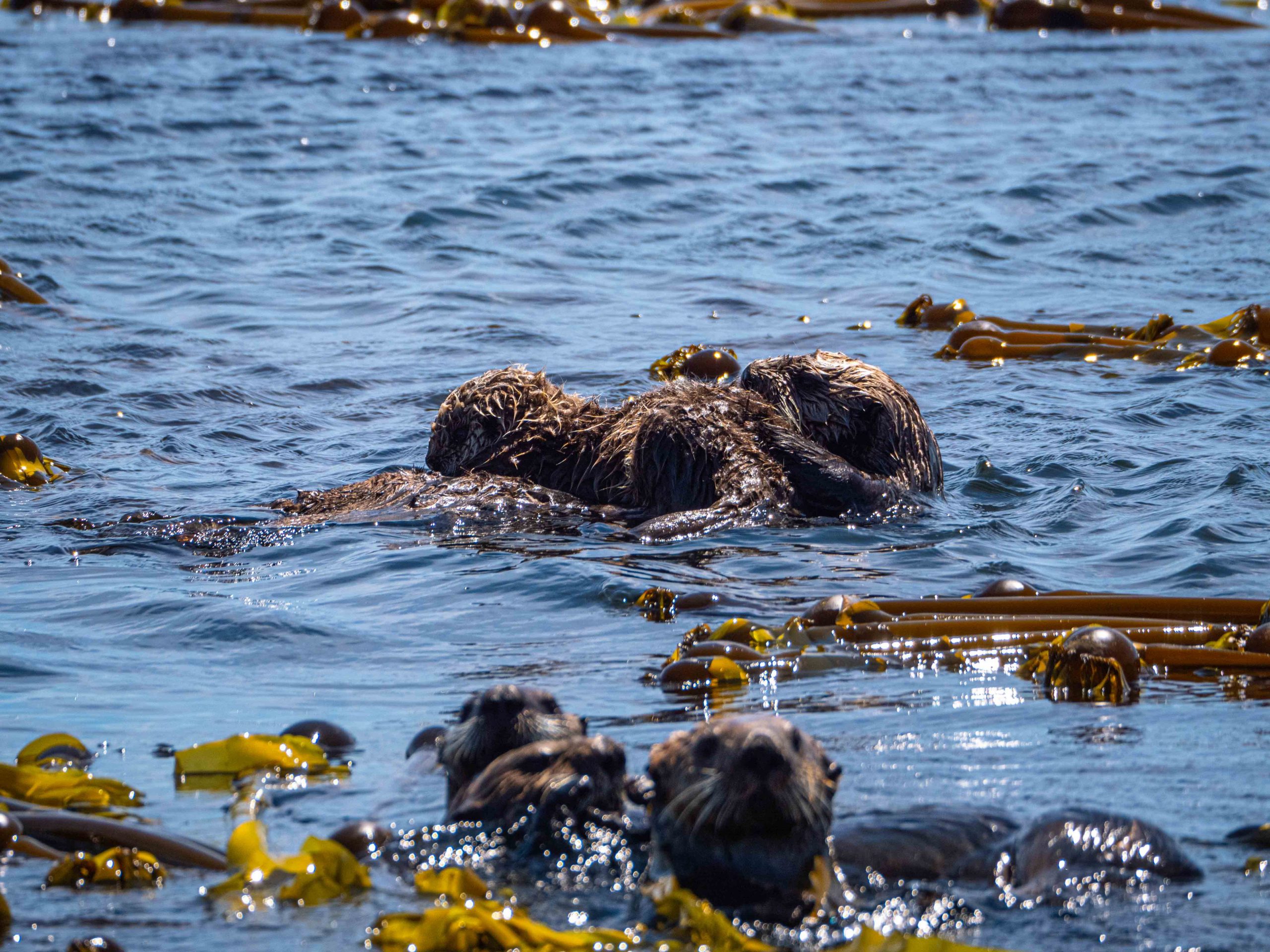 Photo by Kieran Wood on Unsplash

They actually have two layers of fur—a very thick dark undercoat and longer, lighter-colored guard hairs that keep them buoyant. At 850,000 to 1 million hairs per square inch, sea otters have thicker hair than any other mammal, which is why they were so eagerly hunted and nearly became an extinct species.

They're not at all afraid of me, though a couple of them call out. When they talk to each other, they sound like angry kittens.

They eat almost constantly, striking mussels and abalone on the rocks balanced on their bellies in a rhythm that sounds like clapping. If they don't eat the meat right away, they tuck it into the folds under their armpits as they seek out more because with no fat or blubber they have to eat 25-30% of their body weight per day.

When I lived in Santa Cruz two decades ago, the population was dangerously low and, though the count has risen, they're still on the endangered list. Experts estimate there are only about 3000 sea otters in California, while Washington, Canada and Alaska have a combined count of around 70,000, with an additional 15,000 in Russia. Only about a dozen have been counted in Japan. With an estimated 100,000 animals worldwide, they're still endangered and counts are declining mostly because of oil spills and pollution and fishing nets, but also from shark attacks.

And then there are the sea lions. I paddled near the pier to take a look at the ones resting on the pilings. They shoot from the water to the beams during the higher tides and now, at low tide, they are fluffy and dry while their wet cousins bark and circle in the water below.

The bane of boat owners and harbormasters up and down the coast, they heave themselves on boats until they sink. This evening, a neighbor invited me for a late afternoon sail. A life-sized photo of a coyote was hammered into the side of a post, to ward off sea lions. Apparently, it works. 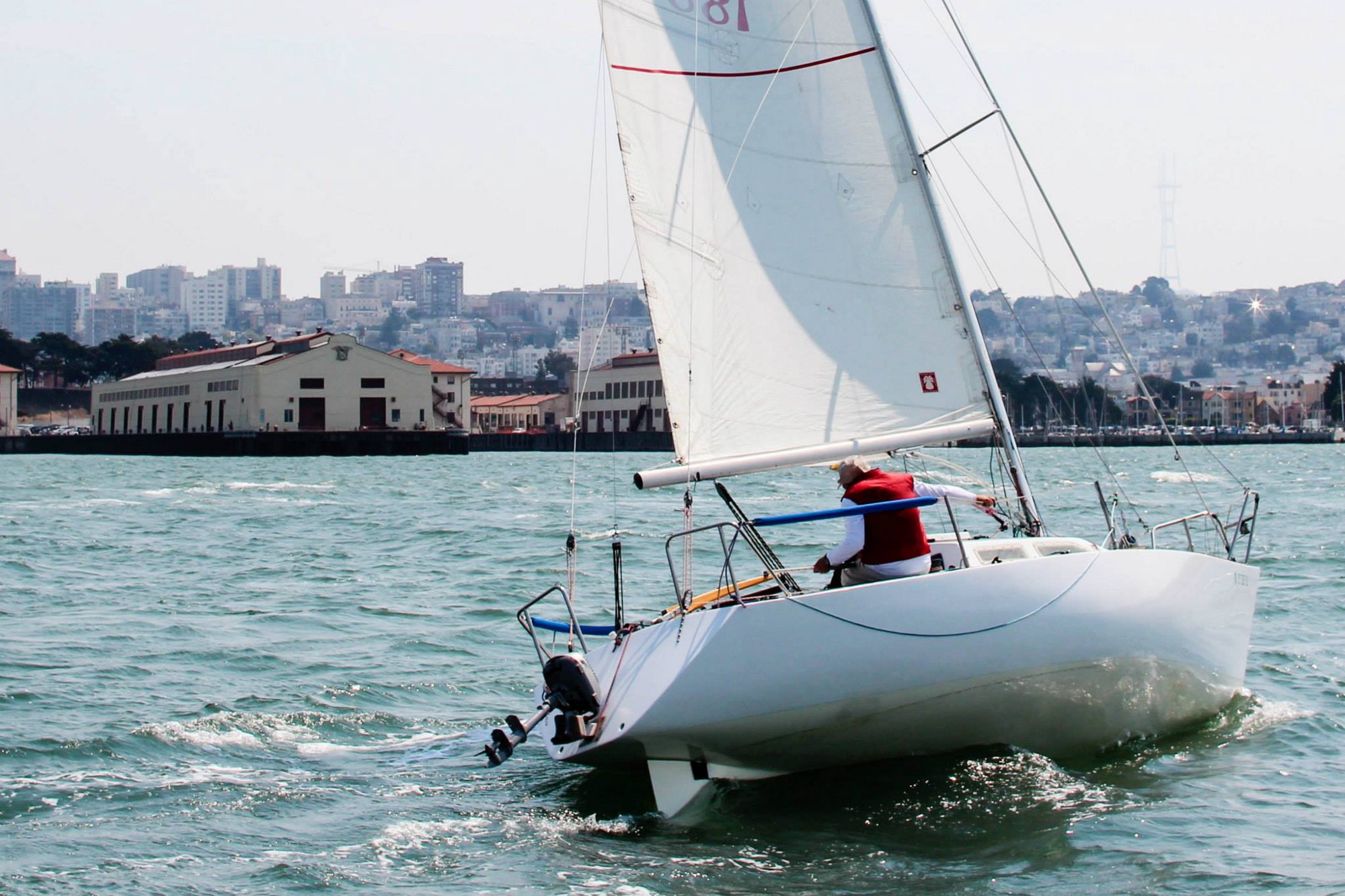 Courtesy sailingtutorials.com The Physics of Sailing

We motored out and caught the breeze, which was gusty and tilted us in a couple of woo hoo moments. It was akin to riding a motorcycle, counter-steering the rudder and leaning into the curves. I learned a little about the physics of sailing, and even did a little steering myself, and pulled in the jib (and stayed out of the way). Fun!

Tomorrow I'm headed to Sonoma for the International Motorcycle Show (IMS) held outdoors at the Sonoma Raceway. They skipped a year due to the pandemic, and found outdoor locations for all their stops this year. I'm looking forward to hanging with my moto friends, and checking out the new bikes and gear.

Going? Catch me at the Women's Coalition of Motorcyclist booth #713 or PM me on Facebook.