FOR THE MEDIA: BIOS AND IMAGES

"My best advice for authors? Make finishing and marketing your book easier by getting to know the other authors who write books like yours.”

See bios in various sizes by clicking the tabs below.

In 1995, Carla pioneered the art of the internet travelogue (now called blogs) with stories about breakdowns in small towns all around the USA from the saddle of a Russian Ural sidecar motorcycle. Other trips on unreliable indigenous motorcycles took her to India, China, Europe, Baja, and Morocco.

She speaks widely about writing and publishing in the adventure travel and literary worlds, at events like Overland Expo and the SF Writer’s Conference.

Carla wants to help you write a great story!

Carla King is an author, journalist, blogger, speaker, and publishing and book marketing consultant. She runs Destination Published, a service for authors, small businesses, and corporations who seek to publish professionally. She has helped thousands of authors with her Self-Publishing Boot Camp educational series of books, workshops, and online courses.

Carla has sat on the advisory board of IngramSpark, co-hosted a long-running literary salon, hosted two podcasts, runs the Virtual Travel Writing Group, and helps design programming for the San Francisco Writers Conference and the Writing for Change conference.

She can help you with every aspect of independent publishing. Her best advice for authors? “Make finishing and marketing your book easier by getting to know the other authors who write books like yours.”

Carla's comprehensive Self-Publishing Boot Camp Guide for Independent Authors is now in its fifth edition and her obsessively-updated Consumer's Guide for Self-Publishers is a gift to authors who need to know who to trust.

She has blogged for Bowker’s Self-Published Author, Bookworks, PBS MediaShift, and hosts the Author Friendly Podcast, which interviews the people who make tools, products, and services for writers.

Carla's first career was in technical writing before she transitioned to travel technology journalist in the early days of portable computing. She worked as a freelancer for the likes of PC World Magazine, where she reviewed travel gear and gadgets. These assignments paved the way for a career as an adventure travel writer and, for O'Reilly and Associates, she helped pioneer the art of the realtime online travelogue, now called blogging.

Carla has contributed to many magazines and anthologies on technology, adventure travel, and solo women's travel. With her writing group, the Wild Writing Women, she self-published Wild Writing Women: Stories of World Travel, in 2001. It was an instant bestseller until it was sold to a NY publishing house. Other books Carla has authored include Stories from Elsewhere: Travels on Two and Three Wheels and motorcycle memoir titled American Borders: Breakdowns in Small Towns All Around the USA. She is currently working on The China Road Motorcycle Diaries, a memoir about her solo motorcycle trip through China.

She has helped thousands of authors learn how to publish with her Self-Publishing Boot Camp educational series of books, workshops, and online courses. She has sat on the advisory board of IngramSpark, co-hosted a long-running San Francisco literary salon, hosted two podcasts, runs a post-covid Virtual Travel Writing Group, and helps design programming for the San Francisco Writers Conferences.

King straddles the world of literary craft and the world of technology thanks to her years consulting in Silicon Valley. From the 80s through the early 00s, she created over 100 specialized hardware, field service, programming, diagnostic, and end-user manuals for companies including Fairchild, Hewlett-Packard, Western Digital, National Semiconductor, and Tandem Computers. Her agent called her “the fixer,” as he often brought her in to complete work abandoned by others.

In 1994, King accepted the challenge to test ride an unreliable Russian sidecar motorcycle on behalf of the US importers. They hoped to sell it as a specialty motorcycle to customers in America. Concurrently, she tested the feasibility of the realtime internet travelogue (now called blogs) for O’Reilly & Associates, the computer book publisher, and one of the first to experiment with publishing on the web. The results were highly successful and King made many other web-centric journeys in China, India, Europe, Mexico, and Africa.

King moved from Santa Cruz to San Francisco in 1995, where she consulted for Verbum, an early desktop publishing, multimedia, webcasting, and (later) electronic music company. At the first Digital Be-In she ran “sidecar interviews” from the Ural motorcycle she’d just ridden (repaired) 10,000 miles around America’s borders. The next year, she was Editorial Director for one of the first webcasts of the Digital Be-In, also run by the founder of Verbum, Michael Gosney. Other colorful early participants included Timothy Leary, then enamored with virtual reality, and Craig Newmark, whose listserv the community much appreciated.

Also at Verbum, King designed CD-ROM scripts for advertising and for games. Their most ambitious project was the highly successful Peter Norton’s 1997 PC Guru edutainment CD-ROM. Shipped with the new Windows computers, it educated countless new computer users on internet features like the “hyperlink” and the “toolbar.” It also demonstrated the tools and products for art, photography, music, books, vacation planning, maps, and personal finance, to name a few. The CD-ROM featured character videos to represent various customer profiles, and an avatar of Peter Norton himself. One of her proudest moments was when Norton told King, “You got me right.”

During that time, King was still consulting in Silicon Valley, notably with Sun Microsystems as Editorial Director to develop their new Web 2.0 site. At Sony Playstation, she created a super-secret, multimedia-rich, internal magazine for game developers in their seven studios around the world. Its purpose was to enable sharing ideas and innovations worldwide, thus reducing wasted energy working on tech already invented elsewhere.

Between contracts, King traveled the world on various unreliable indigenous motorcycles. She also honed her skills as a writer and a mechanic, a skill she learned as a kid in rural North Carolina. Sometimes she worked as brand ambassador for motorcycle manufacturers and gear companies. Other times she traveled on assignment for industry magazines and blogs, including her own early blog.

In 1998, after a four-month solo motorcycle journey in China, 1998, King was invited to join the Wild Writing Women, a notorious group of widely published women adventure traveler journalists in San Francisco. With the WWW, she co-hosted a literary salon, self-published an anthology (2000), four webzines, and traveled to many countries. Many press trips ensued, and such was their reputation that the Irish Tourist Board hosted the WWW in Ireland in 2008. In return, the group, with King as producer, created a 262-page multimedia magazine in Adobe InDesign. Ireland: The Sacred and the Profane, remains a model for multimedia magazines over a decade later.

With this varied experience in writing, editorial, technology, and publishing, King was perfectly poised to follow new developments in independent publishing starting in 2007 with the Amazon Kindle and Smashwords. She has since tracked the technology-based products, tools, and services that help authors in her Consumer’s Guide for Self-Publishers. She has also acted as an industry consultant and author advocate. She speaks at industry and consumer conferences on all aspects of self-publishing.

King is a popular speaker at adventure travel conferences, too. At Overland Expo and Horizons Unlimited, she presents inspirational slideshows about her adventures. She also leads workshops on solo-women’s travel, gear and gadgets, motorcycle preparation, writing, social media, and self-publishing.

In the mid-2010s, a move to the Baja peninsula found King working via satellite between forays adventuring by off-road motorcycle and 4x4 to obscure destinations to camp, paddleboard, and surf. During that time, she penned a column for Discover Baja and created an adventure guide to central Baja.

Today, King helps individual authors, small companies, and corporations with every aspect of independent publishing. She is a coach and consultant, author, workshop leader, and online course designer. Based in the San Francisco Bay Area, she remains an avid traveler and writer and, when grounded because of covid, founded a virtual travel writing group. 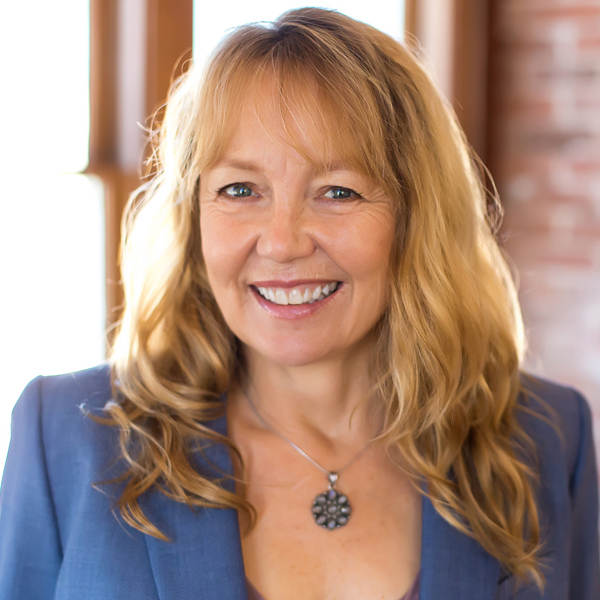 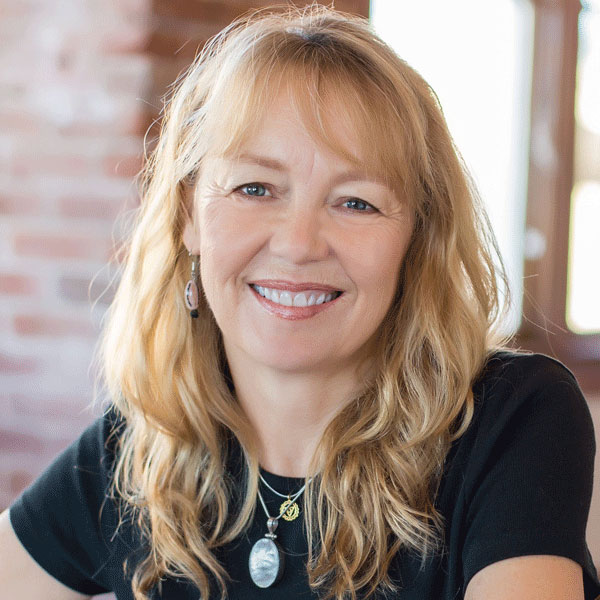 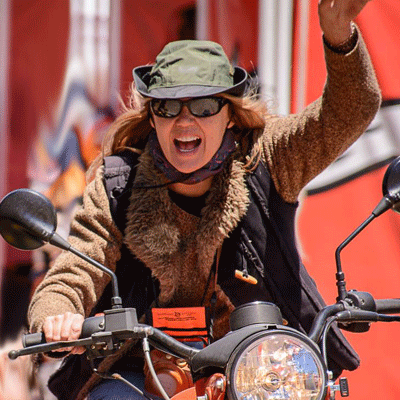 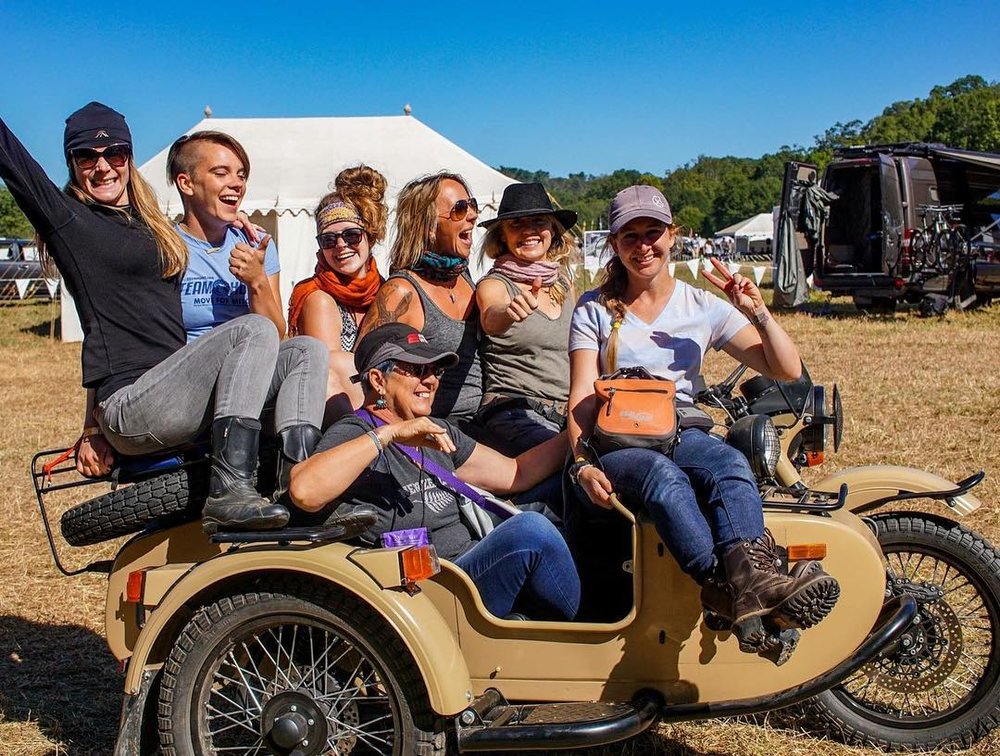 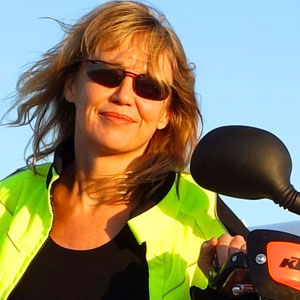 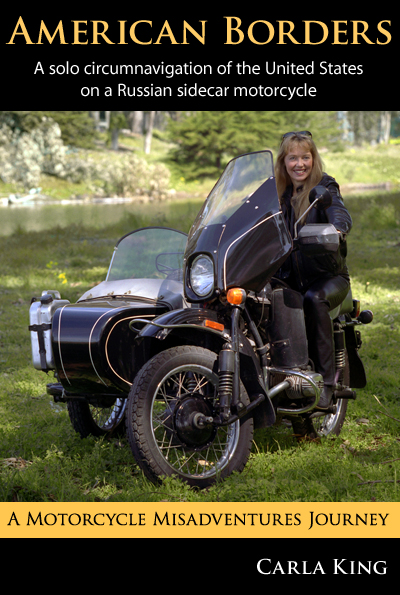 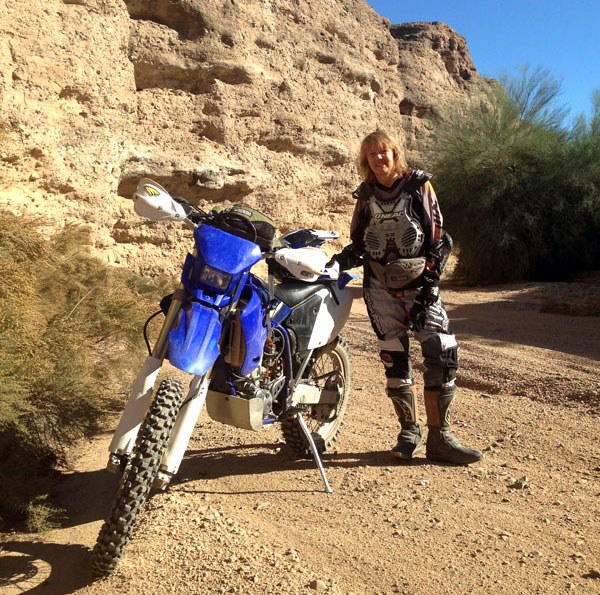 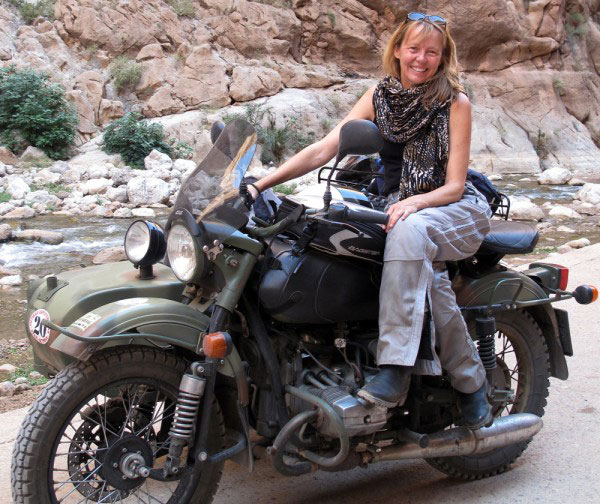 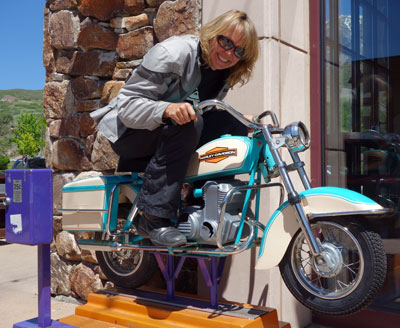 Goofing off in Western Utah 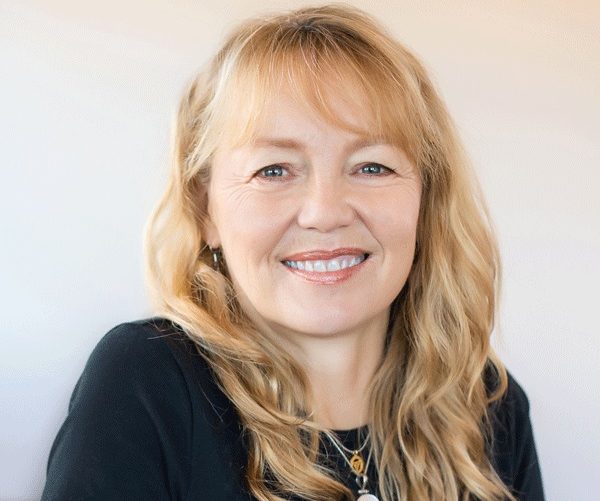 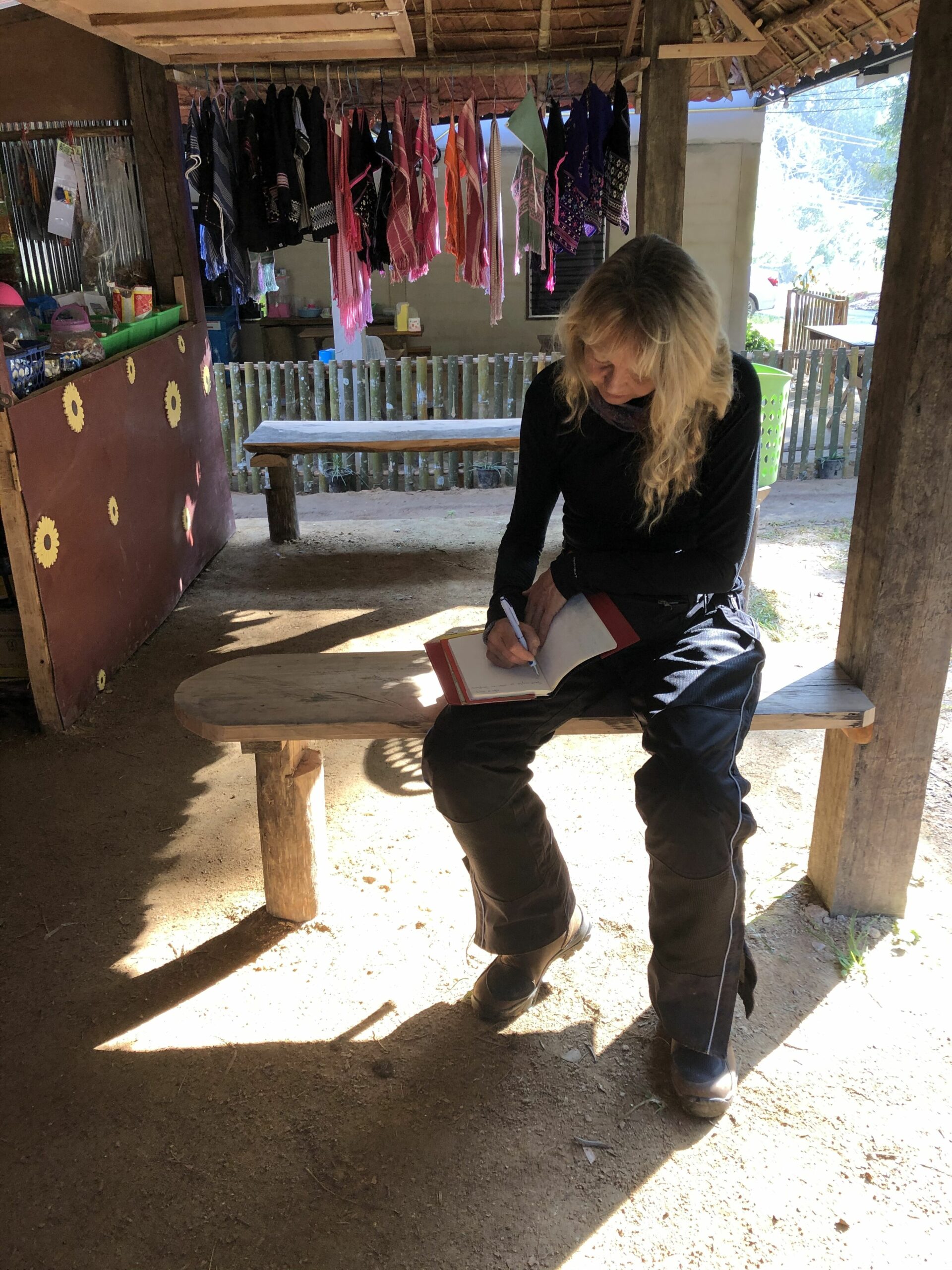 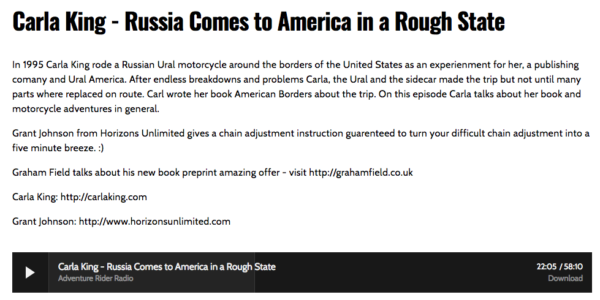 Liz Jansen: (video) Carla King on Living a Life of Freedom and Fulfillment